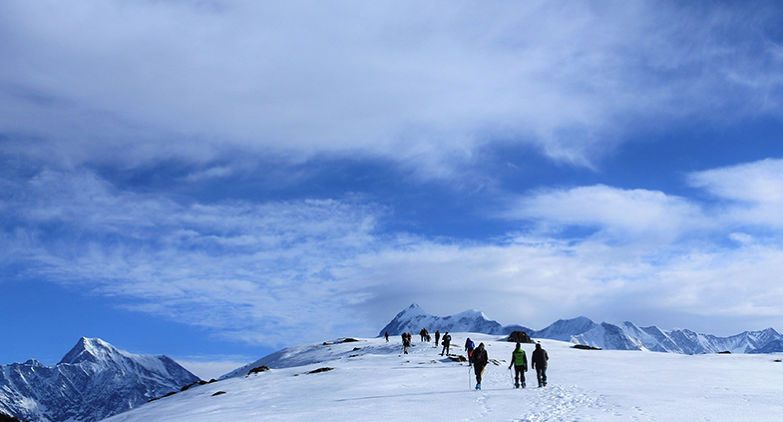 One of the joys of a Himalayan journey is visiting an alpine lake. Unfortunately, during the winter, most of the alpine lakes visited on our trips are closed. The winter Brahmatal hike, on the other hand, takes you to an alpine lake and allows you to camp near it. The Brahmatal trek is remarkable in that it permits you to hike to a lake like this in the dead of winter.

When you stand close to the ice lake at Brahmatal, you’re already at about 12,000 feet. The view is very stunning. A shrine may be found near the lake, while a lone tree can be found on the opposite shore. The lake lies in a crater, and the water is crystal clear. Mt Trishul and Mt Nandaghunti, two of our country’s most beautiful mountains, are seen just beyond the lake’s edge.

While everyone’s attention is on Brahmatal, don’t forget about Bekaltal, another lake worth visiting. Lower down, Bekaltal is also a lovely spot, surrounded by tall trees and enchanted folklore. On our hikes, we occasionally come across such enormous lakes tucked away in the woods. The woodland treks on this trip, which took place in the midst of a layer of snow, were some of our best. They’re captivating without being overwhelming. A long way through the forest can be seen, with snow piled high on the tree branches.

Best Time to Do the Brahmatal Trek

Brahmatal trek is a beautiful journey to take at any time of year, except during the summer and monsoons. The walk has a different flavour in each season — spring, autumn, and winter.

Because this is one of the best Himalayan hikes for birdwatching, spring is a fantastic time to observe Himalayan rhododendrons and go birdwatching. You can stroll through snow and observe frozen lakes in the autumn, and in the winter, when the area is blanketed in white, you may enjoy fresh mountain vistas.

While Deoriatal-Chandrashila is usually cited while talking about rhododendrons, few people are aware that Brahmatal is also a great springtime destination. The slopes are ablaze with dark pink and crimson rhododendrons in the spring. Take a look at it against the backdrop of melting snow.

On your journey, though, you will not see these blossoms. However, trees in blossom may be seen as early as Lohajung. Snow melts at higher elevations, such as around the 10,440-foot-high Brahmatal lake, as the season continues. By mid-April, the majority of the frost on the path and in the surrounding area had melted.

Spring blossoms would have faded and vanished by autumn, leaving a dark canopy of rhododendron and oak trees in their place. During this season, the trees begin to shed their leaves, giving your step a distinct crunch as you walk through them. In the fall, daytime temperatures range from 13 to 18 °C, but any rain or light drizzle quickly decreases the temperature to around 8 – 12 °C. A pullover should be carried at all times.

Another feature of October that few people discuss is sunrises and sunsets. Words fail me badly, but keep a look out for the sunset when you arrive in Tilandi. It’s a tense scenario. As the sun sets, the sky is bathed in magnificent crimson hues. Then, the next morning, get up early to see the magnificent dawn on the other side.

Finally, if you prefer hiking on secluded routes, autumn is a fantastic time to go. However, it is not completely empty in the autumn. For a tranquil experience, choose dates after Dusshera/Diwali and before winter sets in. During this period, the Brahmatal road is at its most desolate.

Brahmatal is open during the high winter months of January and February, when other Himalayan treks are closed. It is open from December to February, and later into the spring. Temperatures range from 8 to 12 degrees Celsius, making for a comfortable day. When you’re on snow, the light bounces off the snow, making it quite warm! At night, the temperature in the upper camp might drop to minus 7 or 8 degrees Celsius. As long as you’re in your tent and clothed appropriately, it’s fine. When you start your summit ascent early in the morning, expect temperatures to be well below zero. And that’s a good thing, because the Brahmatal trip’s winter snow is beautiful.

How difficult is the Brahmatal trek?

The Brahmatal trek is intermediate in difficulty and climbs to a height of 12,250 feet. A moderate rating indicates slightly longer hiking days with a few steep hills thrown in for good measure. It does, however, contain simple exits and no difficult sections.

In terms of details, you’ll cover a total distance of 24 kilometres in three days and gain about 4,650 feet. You’ll walk an average of 7 kilometres per day, including ascents and descents.

When climbing to the peak in the deep snow, use your micro spikes. In hard snow, slips are fairly common. A slight slip can result in a ligament rupture, a sprained ankle, or even a fracture. Always walk on the footholds left by previous hikers.