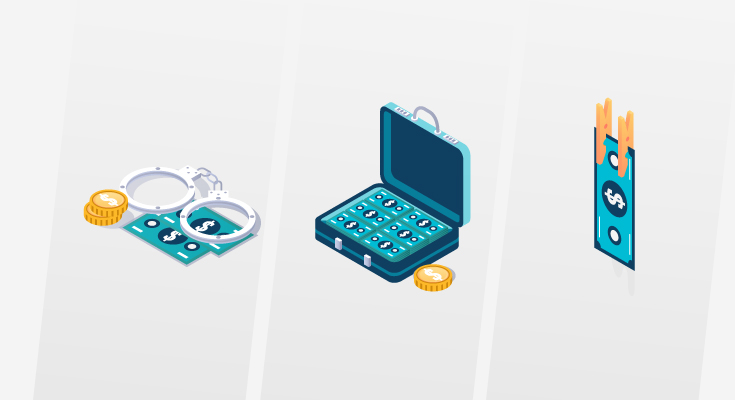 Money laundering is without a doubt one of the biggest threats faced by financial institutions from all over the world. Money laundering is a process, where fraudsters move around money under the regulatory body’s radar and convert illegally sourced money into legal funds. Funds can be acquired from drug trafficking, human trafficking, and money earned through any other sources. To prevent the flow of money laundering throughout the financial industry, Anti-Money Laundering laws need to be followed by banks, financial institutions, credit unions, and other businesses. AML programs are mandated by the government in various jurisdictions and are aimed to be used by banks, FinTechs, insurance firms, credit unions, casinos, mortgage lenders, and others.

AML breaches happen all over the world, whether due to a lack of technologies, lack of knowledge, or resources. In the last year itself, over $10.4 billion were fined by regulatory bodies in just the USA alone. Below are the two main examples of money laundering fines.

In Europe, financial institutions operating in Estonia, Latvia, and Lithuania and the FSA in Sweden fined the SEB Bank a whopping $107 million fine for lack of AML compliance in its operations in the Baltics. SEB Bank was specially mentioned for lack of internal controls and continuous transaction monitoring throughout subsidiary banks in the Baltic state.

Not just traditional banks and financial institutions, crypto exchanges, and businesses operating in the crypto industry are also being levied huge fines. Helix, a Bitcoin exchange, was fined $60 million by FinCEN for violating the Bank Secrecy Act. The chief operator of Helix “Larry Dean Harmon” will face 20 years in prison.

Helix was being used as a money-laundering service. They were charging customers to send crypto to any address in a way that hid the true owner of the cryptocurrency. Helix had zero risk assessment policies or customer due diligence programs, Know Your Customer (KYC) procedures or any other basic AML procedures. Ideally, Helix operated as an illegal body.

Every year, AML regulations and fines tend to become more strict to protect financial institutions and stop fraudsters from laundering money. In the U.S the National Defense Authorization Act (NDAA) made huge reforms to the AML laws. The most notable AML reforms are:

In June, FinCEN released its priority list for future changes in the AML regulations. Their list of priorities includes improving all the areas of AML directive such as:

In Europe, the European Commission is working tirelessly to expand the current AML directives and their operations. In Asia, Singapore, Philippines, Australia, and other countries governments are putting their best efforts to reduce the flow of money laundering by increasing fines and boarding the current AML rules and regulations.